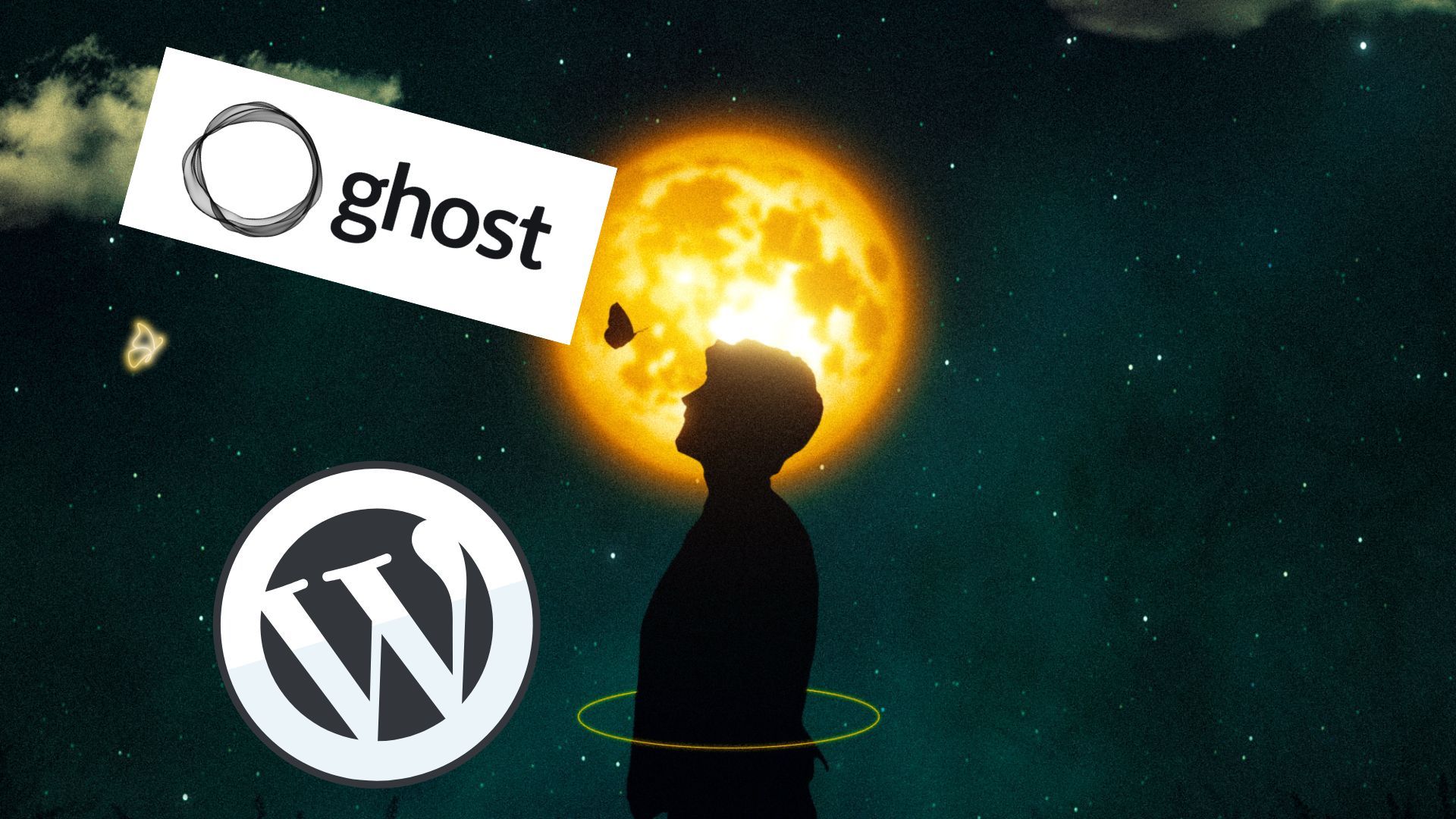 In human years, WordPress has already graduated high school and probably working a part-time job while taking college classes. In tech years, WordPress is part of a suite of legacy technologies that were new and shiny when it first came out - but over time, the prettiness has waned significantly.

In tech years, WordPress is part of a suite of legacy technologies that were new and shiny when it first came out - but over time, the prettiness has waned significantly. Released in 2003, WordPress is turning 20 and nothing screams legacy code more than something that's got 2 decades of history behind it.

Yet, WordPress holds on - 43% of the Internet to be more precise.

So what makes WordPress so popular? Why is it often the go-to content management system (CMS) for many? And where does Ghost fit into the picture?

WordPress is synonymous with blogging. It was launched by a guy named Matt Mullenweg - a nerdy 80s kid that launched the platform back when he was a young strapping 19-year-old.

That was back in 2003 - when the Internet had just figured out how to walk and Amazon wasn't quite a thing yet.

When it comes to WordPress, there are 2 parts to it - WordPress.com and WordPress.org.

So what is WordPress?

In a nutshell, WordPress is a blogging platform, made for writing and highly customizable and extendable through themes and plugins.

Ghost was born and initially funded by a community that was fed up with the mainstay issues of WordPress at the time, which were (and some still are):

While WordPress is still great, for people who just want to write, the platform has overextended itself into other areas beyond its initial inception.

Ghost is different. The platform focuses on writing and writing only - with an emphasis on sharing and community building without the complexity that is WordPress.

Ghost is the expert of blogs, publications, and writing.

WordPress, meanwhile, is more the jack of all trades.

The Growing Pains with WordPress

WordPress has its perks, but the growing pains have existed for much longer than Ghost itself. Here are the top common issues that WordPress users experience.

Being popular and widespread means that WordPress is often a target for hackers. There's an estimated 90,000 attacks per minute on WordPress websites. 61% of attacks target outdated sites, which often exhibit security vulnerabilities in some form. 52% of WordPress vulnerabilities are caused by outdated plugins, 37% are due to the core files, and 11% of attacks are successful due to security issues with themes.

There are 36 major versions of WordPress. A good portion of live sites are rocking older versions and untouched by updates since the beginning of its existence.

WordPress' history of being highly insecure is not entirely the platform's fault. In part, it's to do with content owners being locked in and unable to update due to various reasons.

WordPress is often the first choice for writers because of how much it gets talked about.

For newbies getting into content creation, writing, or just someone in need of a website - WordPress is the go-to simply because it is one of the most talked about when you first hit Google. It is also widely supported by hosting providers and is a staple for anyone looking to host their own content independently.

But being the most popular doesn't always mean it is the best.

The issue with plugins and themes

WordPress' plugin and theme system are flawed. There is no standard or checks in place. The more plugins you have, the increased number of risks involved.

In 2021, there were 35 critical vulnerabilities reported in WordPress plugins. 2 out of 35 of these issues were found in plugins with over a million installations. Unless you keep up with cyber security news (which a majority of WordPress users do not), you would know that your content is an open door for hackers.

In 2020, 96.22% of vulnerabilities came for plugins and themes. In 2021, the number got worst and rose to 99.42%. While WordPress itself is not directly at fault, its structure makes it ancillary to the issue.

Ghost isn't the newest kid on the block, but it certainly is better at WordPress at doing what it's designed to do - provide content creators with a platform to simply write.

Here are the things that Ghost solves for writers and content creators.

The creators of Ghost are ex-WordPress developers. They know the pain of confusing UIs and having too many options.

Some people just want to write and that's what Ghost focuses on - writing.

The entire Ghost backend interface is focused on providing a streamlined experience. It doesn't allow directly integrated plugins, which cuts down a majority of vulnerabilities and security issues that WordPress experiences.

So ho does Ghost work with extensions? What if you need a shop? What about SEO?

There's no need to add plugins like Yoast SEO or SEOPress because Ghost comes ready with industry-standard SEO implementations.

This means that all your meta tags and details are automatically added. Ghost also provides a site map and XML ready content for SEO bots. Your page speeds is not bogged down by things trying to load in the background or your server trying to process over a dozen plugins you've got installed.

Ghost is lightweight and faster, and comes predesigned with the ability to talk to your readers through an integrated commenting system that requires email verification for signups. This is great against spam and backlink bots.

If you're using Pro Ghost, all the technical setup is managed for you. From here, all you have to do is find a theme you like and start writing.

So how do you extend the core functionalities of Ghost? How do you add a shop? and everything else in between the kitchen sink?

Unlike WordPress, where it's everyone and anyone, Ghost integrations are based on trusted third parties. For custom integrations, API keys and webhooks can be used to access data from your Ghost installation. This setup makes it more secure than WordPress - where unvetted plugins can simply live on your WordPress site and leave access to your content like an open door.

Ghost makes sure that you are aware of what you're doing and why you're doing it at every step of the process.

WordPress is good but Ghost is better

Don't get me wrong, WordPress is good but Ghost is better for writers and people who just want to write.

WordPress started as a writing platform, but now it's just trying to do and be everything - which it can't, not in a secure and effective manner.

Ghost stays true to the focus and that is - to serve writers - and it does it well.

If you're looking for something that isn't going to fall to pieces as your audience grows or introduces vulnerabilities - check out Ghost and give it a try.